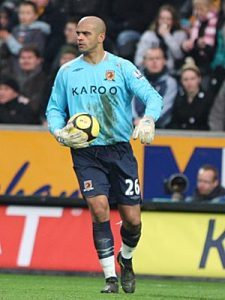 Goalkeeper Warner spent two Premier League seasons on the City bench, getting the nod for a couple of Cup fixtures along the way.

Born in Liverpool he started his career at the Reds but rarely made the first team.  A switch to Millwall in 1999 saw Warner establish himself and in five years he made over 200 starts, including a leading role in the Lions’ unlikely run to the FA Cup Final.  Further seasons on the fringes of the first elevens of Cardiff City and Fulham followed, before his switch to Hull City.

Warner left Hull City in February 2010 and embarked on an extended tour of lower league English sides, New Zealand, Malta and India.  He was appointed goalkeeping coach at Indian Super League side Chennaiyin FC in 2017 and returned to England to fulfilled the same role for Accrington Stanley in July 2018.

Warner made his international debut for Trinidad & Tobago in 2006, claiming a second and last cap in 2011.