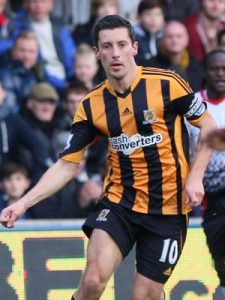 Slovenian midfielder Koren was the driving force behind City’s recovery from Premier League relegation, contributing goals and assists for three seasons that climaxed with promotion back to the top flight in May 2013.  For much of those three years he was widely regarded as the finest midfielder in England outside the Premier League.  Koren had a sixth sense for finding space between defenders and midfielders, had a fearsome shot in the 20-25 yard range and also took a mean free kick.  He played a supporting role in City’s subsequent Premier League season, leaving in Summer 2014, but remains a pivotal player in City’s successes in the 2010s.

Koren’s career began with Solvenian lower league side Dravograd and first division stalwarts Publikum Celje.  In 2004 he switched to Norwegian side Lillestrom, a move that saw his reputation build rapidly as a skilled playmaker. Three years later in January 2007 he joined West Bromwich Albion after refusing the advances of Leeds United, assisting the Baggies to a Championship play-off final and a promotion, then turning out regularly in their Premier League side.

Robert headed south in 2014 and joined A-League side Melbourne City, where he spent two seasons before retiring in 2016.  In 2016 he became the Head Coach of the side he started his career with, Dravograd in the austere surroundings of the Slovenian Third Division. In 2019 he moved to Slovenian top flight side Celje, his other former club, to play a similar coaching role.

After playing at all youth levels, Koren earned 61 senior international caps for Slovenia between 2003 and 2011, scoring five goals and appearing in the 2010 World Cup Finals.