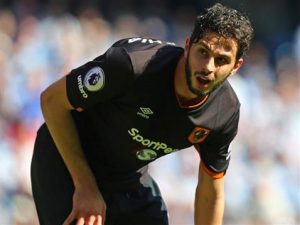 Andrea Ranocchia (aka “The Frog”) was an Italian international centre back that joined the Tigers during January 2017 on loan from Inter Milan.  Ranocchia had a reputation for blunders but played imperiously for a dozen games, although his form did dip at the most intense time at the end of the season, airshotting in the second minute at Crystal Palace and allowing Zaha to bag an early and decisive opener.

Born in Assisi, Ranocchia began his senior career as an 18 year old at Tuscan side Arezzo.  After two seasons at Genoa, Andrea joined Internazionale during December 2010 and remained their for twelve years, having loan spells at Genoa, Sampdoria and now Hull City.  In June 2022 he left Inter and joined newly promoted Serie A side Monza, but hung up his boots two months later after just 2 appearances.

Ranocchia played at youth levels for Italy and has a number of senior caps.  He was a favourite choice under international manager Antonio Conte, who was his first club manager as a young player at Arezzo.